After completing a degree in philosophy, he entered the monastic order, receiving full ordination in Sri Lanka in 1973 under the late Ven. Balangoda Ananda Maitreya. After the retirement of Ven. Nyanaponika in 1984, he served as editor (and later president) of the Buddhist Publication Society.

He is the author, translator or editor of many important books and essays, as well as the creator of ten audio lectures on the fundamentals of the Buddha's teaching. In May 2000 he gave the keynote address at the United Nations on its first official celebration of Vesak. He moved back to the U.S. in 2002 and currently lives and teaches at the Bodhi Monastery in New Jersey, where he serves as president of the Sangha Council of Bodhi Monastery and chairman of the Yin Shun Foundation.

A Comprehensive Manual of Abhidhamma - eBook

A Study of the Paramis

Buddha and His Dhamma 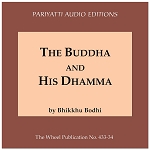 Buddha and His Dhamma (MP3 audiobook)

Buddha and His Message, The

Comprehensive Manual of Abhidhamma, A

Connected Discourses of the Buddha

Dāna - The Practice of Giving

Discourse on Fruits of Recluseship